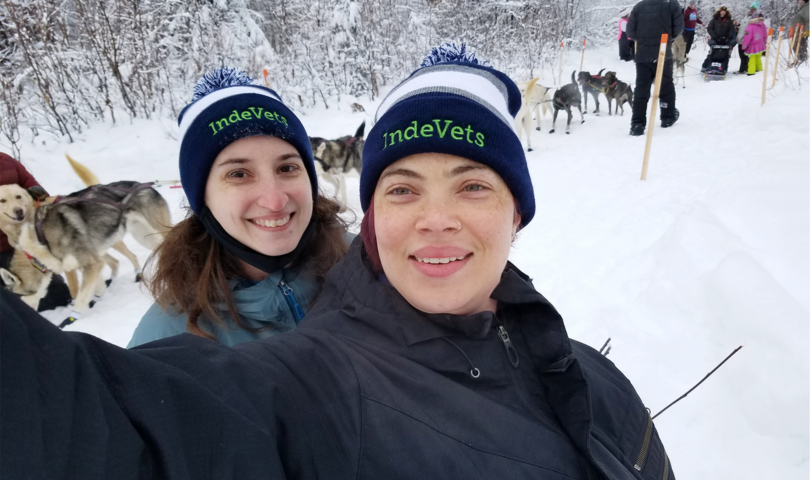 At IndeVets, we’re constantly in awe of our doctors. IndeVet Stories is a new, occasional column where we highlight the very cool things our doctors are up to.

We firmly believe that work should fit into your life — not the other way ’round. All Associate IndeVets have the freedom to set their own schedules, and to choose when they work, and when they don’t. This column focuses squarely on the “when they don’t.”

Today, we check in with IndeVets Chaundra and Katelyn, who recently journeyed to Willow, Alaska, to vet sled dogs before the Willow 300, a qualifying race for the Iditarod. The Willow 300 took place February 4 through 7, 2021. Below, Dr. Chaundra shares updates from her experience.

We’re in Alaska! It’s currently 5 am, and I’m up because despite running a significant sleep deficit, my body still thinks it’s 9. Oh well.

Tuesday — Our travel day was long. The east coast storm did wreck the flight schedule a bit resulting in us leaving at 11:30 rather than 8:15. Of course we didn’t find any of this out until we were already at the airport.

Luckily, they were able to rebook our connecting flights and still get us to AK that day. We got into Anchorage at 9:30 (AST) instead of 6:30, but were still there in time to pick up Dr. Katelyn when her flight arrived at 10:20. Off to Humpey’s for some late night pizza and into bed by 1 am AST (for those of you playing along from the east coast, that’s 5 am).

Wednesday — up at 5:30 to get ready for vet checks! (Prepare for pics of cute sled dogs!). Our team of 11 vets looked over 38 sled teams to ensure all were in tip-top shape for starting the race.

They were all happy little hounds, and some were super excited to see us. Bentley from Shameless Huskies kennel would not stop giving me hugs! I also got to do a dance with Michael Jackson on Lev Shvarts team. He definitely wins the award for most humorous dog names, where as Shameless Huskies is still my favorite kennel name.

Got to reconnect with some vet friends and musher friends made at last years W300. Oh! And I also got my mittens made by a friend. This year my hands will be toasty! Overall, it is looking to be an exciting race!

Katelyn and I are at Sheep Creek and Fork’s. Fork’s will require a snowmobile ride to get out there, and Sheep Creek is where I had the most delicious blueberry pancakes last year. I am very excited about the postings this year!

We’re all snuggled into a cute little cabin at the Talkeetna Roadhouse as our base of operations. For those that don’t know, Talkeetna is the town the show Northern Exposure was based off of, they’re the southern most ranger station for Denali NP, and they have a cat (also named Denali) for a mayor.

Alright, let’s see if I can get a bit more sleep before the race.

The race started at 11am with teams leaving in 2 minute intervals from Deshka Landing. This is the same place where 2021 Iditarod will re-start since the community center at Willow Lake is still under construction.

The dog yard was a cacophony of yips and barks, which from a distance sounds like the largest flock of geese you’ve ever heard. It’s crazy! The dogs will bark and jump and carry on, but once the flag drops the barking stops and they’re all business about running.

After race start we went to Iditarod trail headquarters in Wasilla to grab some trail stamps and merch. Next stop was a local brew pub for noms. I had some fried pickles and chicken sliders, they were delicious!

It’s 9 pm now, just woke up from a little nap. Soon we’ll be heading out to Sheep Creek Lodge to vet the teams as they roll in est. starting around 1am. It’s going to be a long cold night. Temps are supposed to be around 1 degree above zero.

It’s all over. The last musher made it in around 11 today, almost 72 hours to the minute from the start.

Katelyn and I have been stationed at Fork’s Roadhouse which is a very remote check point. There was no cell service or wifi out there, so we were unable to keep you all updated. It was a long 36 (or so) hour shift with temperatures bottoming out at -20. My new mittens were crucial.

We almost got to see the northern lights, but they were shy when we ventured out to see them. Though we heard others saw quite the show. Fingers crossed we may see some tonight. We had a beautiful view of Denali.

Got to ride a snow machine for the first time. Also learned it’s not called a snowmobile… ever.

All in all it was a good race. Despite the chill and sleep deprivation, its been an amazing experience. Thanks to all the mushers, race volunteers and Willow 300 Sled Dog Race 2021 for making it happen! We’ll see what happens next year. Though one of these years, I’m going to have to ride in a sled.

Tomorrow we’re going to have a play day in Anchorage, then hopping a redeye home. Thanks for watching/ playing along!

Here are a few more pics from our adventure:

Good death: Reflections on grief, loss and euthanasia in 2020

How Covid amplifies burnout in vets, plus 4 tips for maintaining well-being

Stay up to date on IndeVets.